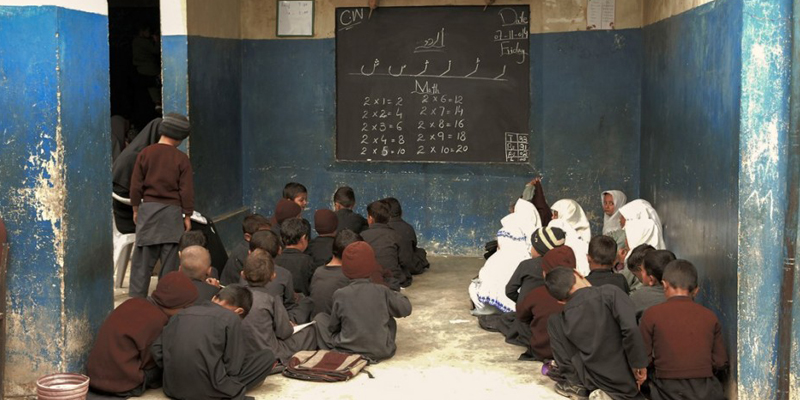 Health and safety risks loom in most public schools of Karachi, with school administrations and relevant officials failing to make arrangements for the implementation of necessary pandemic-related standard operating procedures (SOPs) ahead of the start of the new academic year, starting on September 15.

Garbage piles plague most public school buildings, some of which are in derelict condition, it emerged on Sunday. The lack of cleanliness, if not addressed urgently, poses the threat of spread of the coronavirus pandemic, imperilling students' health and safety.

Besides, fumigation and disinfecting initiatives on public schools' premises remain in abeyance, even as educational institutions are set to reopen tomorrow after a six-month-long closure. The problem seems to become graver in the light of reports of the absence of sweepers and other cleaning staff at a majority of schools.

In North Karachi, Moonlight Government Boys Secondary School is a prime example of relevant authorities' negligence. The school's building is in bad shape, with plaster crumbling from the ceilings of classrooms. Garbage piles aplenty litter the corridors and, to make matters worse, filth-ridden washrooms are being used as a chicken coop, with roosters strutting around.

With little chance of these problems being set right before the commencement of on-campus classes tomorrow (Tuesday), students will not just be exposed to the possibility of contracting the coronavirus, but also suffering due to structural damages.

According to principal Saeed, he had made arrangements for cleaning the school but when he visited it the next day, he found paint and plaster covering the floors and desks once again, having fallen in chunks from the ceiling overnight.

He claimed he had informed relevant authorities, including the works and services department, but no action was taken to rectify the situation.

Meanwhile, the woes of the newly-constructed Allama Iqbal Government Boys Higher Secondary School in Gulberg Town are of a slightly different nature.

According to sources in the school, who requested anonymity, no sweeper or other cleaning staff have been hired. They said around 700 students were enrolled in the school and among them, matric and intermediate students would begin attending on-campus classes from tomorrow, yet no proper arrangements for the implementation of SOPs and cleaning had been made.

It's all on paper, they said, adding that no practical measures had been taken.

The Express Tribune has learnt that, reportedly, neither of these schools have been provided the funds allocated for school management committees for the past two years.

The Sindh School Education and Literacy Department's steering committee had earlier approved pandemic-related guidelines to be observed at educational institutions as they reopen.

In a notification issued in this regard, educational institutions' managements were instructed to ensure the regular cleaning and disinfecting of school buildings, as well as round-the-clock availability of water and sanitation facilities. As per their instructions, classrooms, washrooms, other areas, and furniture were all to be disinfected regularly, with hand sanitisers and covered trash-cans placed at different spots on school premises.

However, the present condition of numerous public school buildings suggests that relevant authorities, as well as schools' management paid little heed to these instructions.

In fact, it seems that the Sindh government and the school education department are generally not bothered about administrative issues posing hurdles in the way of running government schools - to the point that the post of the Karachi primary schools director has been lying vacant for the last 15 days and there is no authority to monitor schools' organisational affairs.

Admitting to the lack of sweepers in many schools under his authority, he acknowledged that it was a major problem.

"We are trying to deal with it," was all he had to say when asked about the dire condition of public schools ahead of the new academic year, adding that he would be attending a meeting with Sindh Education Minister Saeed Ghani to discuss the arrangements for reopening schools.

While he did not say when this would happen, he assured The Express Tribune that the plan chalked out would be shared with the media by Ghani himself.

However, it appears the plan will be of little help in keeping Covid-19 at bay in schools across the province tomorrow, when they reopen after a hiatus of six months.