The government of Punjab has announced the schedule for reopening of schools across the province on August 2, Monday, said Punjab’s Education Minister on Thursday.

The minister further noted that the schools will open with a staggered approach. Only 50 percent attendance will be allowed per day, and no student will be allowed to attend the school for two consecutive days.

Taking to Twitter, the minister notified that the school will be reopened following the phase-wise model. He said that only 50 percent of attendance will be permitted per day. He advised all the stakeholders to ensure the complete COVID-19 SOPs.

The education minister also shared a notification with the tweet that detailed school timings from 2 August, onwards. In his tweet, the minister also shared a notification with details of school timings from August 2, onwards. The notification read that said that all boys-only schools will operate from Monday to Saturday from 7:30 am to 12:30 pm, while the girls’ schools will run from 7:45 am to 12:45 pm. Meanwhile, the afternoon shifts will run from 2:00 pm to 5:00 pm on the designated days.

It added that the school timings for district Murree and Kotli Sattyan (hilly areas) will be notified by concerned administrations. 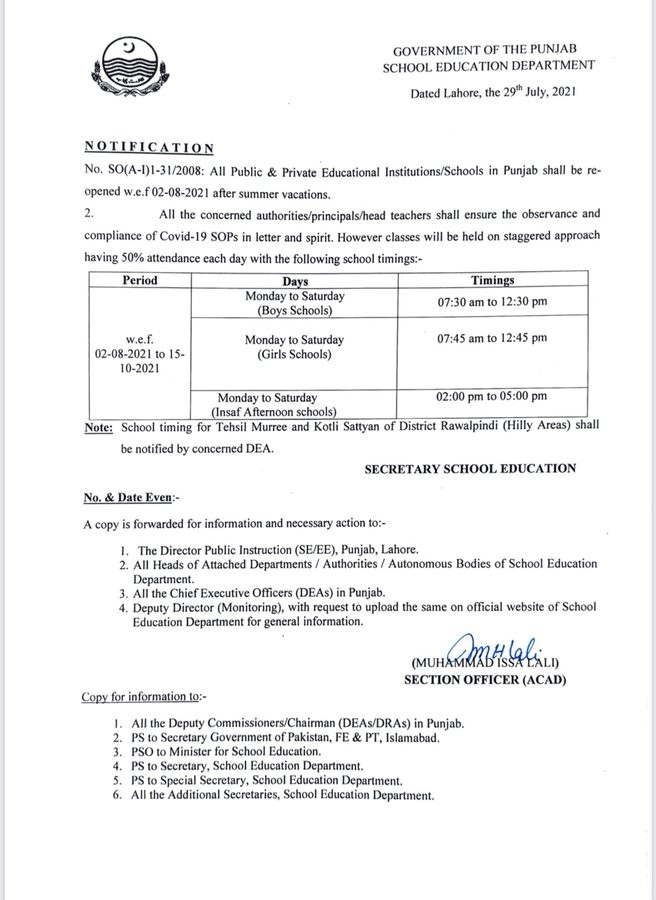 It is pertinent to note that the National Command and Operation Center (NCOC) had announced last week to reopen schools as per the schedule despite a surge in COVID-19 cases across the country. In Karachi alone, the pervasiveness rate of the coronavirus was recorded at 30 percent with a huge spike in delta variant cases.

Sindh's government has contracted out 32 schools to private parties.

MDCAT exams to be held on schedule