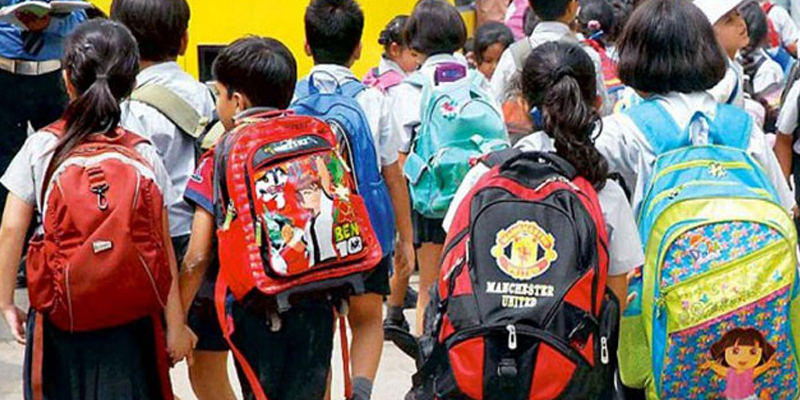 Peshawar    -  A recent research conducted by experts in Spain revealed that the children who carried 10 percent extra weight of school bags than their body weight face multiple complication including sever pain in neck, back and shoulder while it also had worst effects on their overall growth.

Attaching priority to children’s health the Khyber Pakhtunkhwa Cabinet recently approved a proposed “School Bags Limitation Weight Act 2019” in which the public and private schools would be bound to reduce the weight of school bags less than 15 percent of the child’s weight.

The bill proposed severe legal action against principals of public schools while private schools would face a penalty of Rs200,000 and cancellation of registration as well.

The public and private schools would provide lockers to students for keeping their books, copies and other necessary items.

Trump official held talks in Syria to free US hostages

The bill which was proposed on the directives of Peshawar High Court proposed different weight of schools bags for students of Class KG to Grade-12.

The initiative of the government was largely lauded by civil society, parents and teachers as well. They said that modern education system had overburdened the school children while compromising on their mental and physical health.

Renowned journalist Sehryar Jalil, working on education, said the practice of less weight school bag for children was first introduced soon after World War-1, saying that the school children had to travel 10 to 20 kilometres by foot to reach their schools at that time, therefore the decision was taken. He said later the governments and education departments paid no attention to the practice due to availability of personal or private transport facilities to the children that resulted in gradual increase of the weight of school bags.

Lady Reading Hospital Peshawar Assistant Professor of Peads Medicine, Dr Mohsin Hayat Safi said they were approached by parents for common exhaustion and tiredness issues of their children. He explained that children felt pain in shoulders and back bone due to heavy bags.

Dr. Mohsin said that children’s body position got disturb if they used one shoulder for their heavy bags. Their lumber area back bone might be affected due to heavy bags, said Dr. Mohsin.

According to an international research on school bags by a NGO, all children of same age can’t carry school bag equal to their own body weight and extra burden adversely affect their growth as well as causes damage to backbone.

A mother of two school-going children, Dr Uzma of Peshawar University, said she was very happy with the decision of the KP government. She said her 10-year old daughter frequently faced backache problem and on her medical check-up the doctor recommended considerable reduction in her school bag weight which was affecting her backbone.

She said, “I feel immensely relaxed now after decision of the government and hope that soon the act would become law.” She said the government should also ban bags with wheels as these could cause fatal accident for students while crossing roads or going upstairs in schools.

An official of Education Department said that the provincial government was also considering to reduce the weight of books and copies by using high quality but light weight material.