Mahmood rubbishes “false news” regarding reopening of schools in October 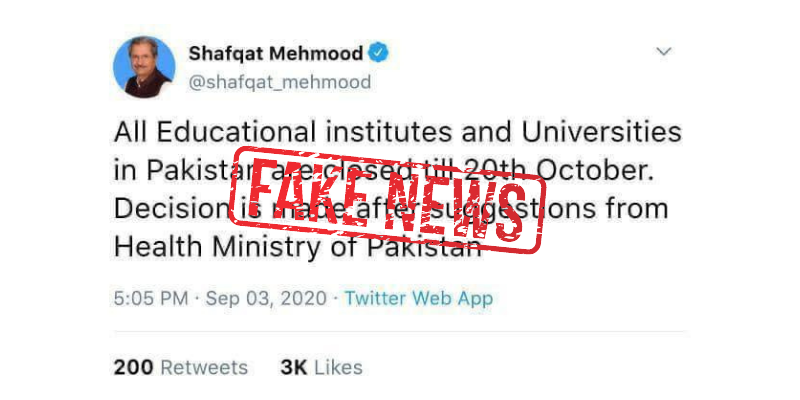 Mahmood rubbishes “false news” regarding reopening of schools in October

The federal education minister Shafqat Mehmood said on Friday that false news regarding the reopening of schools in October is circulating through fake accounts made in his name.

“Some fake accounts in my name are spreading false news that schools will remain closed till Oct not true,” the minister tweeted early morning today.

Mahmood clarified that the final decision regarding the reopening of schools will be announced soon, “Education ministers meet on 7th to finally decide with the likelihood of opening on Sept 15 in a phased manner,” he said.

In July, the federal government had announced September 15 as the tentative date for the reopening of schools depending on the pandemic situation in the country.

Mahmood said that the ministers will be responsible for ensuring that the SOPs are followed, advising schools to follow the guidelines given by the government and provincial ministries.

However, the meeting in August decided that no educational institutions should be reopened before mid-September and the suggestion by Khyber Pakhtunkhwa (KP) government to reopen schools from 1 September was also rejected.

The Sindh Education Ministry had also said that no schools will be allowed to reopen before September 15 and if the schools go against the orders of government than their license will be canceled.