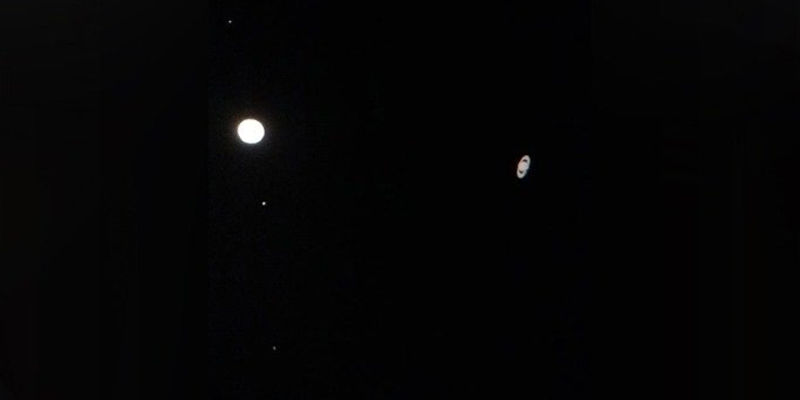 The University of Karachi Department of Space Science and Technology (ISST) witnessed the reunion of Jupiter and Saturn, when evening sky over the Northern Hemisphere treated stargazers to a once-in-a-lifetime illusion on Monday as the solar system’s two biggest planets appeared to meet in a celestial alignment that astronomers call the “Great Conjunction.”

Dr Jawed Iqbal, the Director of ISST Professor said that in the process, the two planets of the solar system seemed closest in the sky after about 400 years.

A conjunction of the two planets takes place about once every 20 years. But the last time Jupiter and Saturn came as close together in the sky as on Monday was in 1623, an alignment that occurred during daylight and was thus not visible from most places on Earth.

Dr Iqbal explained that when both these planets came closest in the sky and observed in the same direction during the same time, then we call it a conjunction.”

The last visible great conjunction occurred long before telescopes were invented, in 1226, halfway through construction of the Notre Dame cathedral in Paris.

The last visible great conjunction occurred long before telescopes were invented, in 1226, halfway through construction of the Notre Dame cathedral in Paris.

Dr Iqbal added that special arrangements were made for the sky-watchers and students to observe this exceptional great conjunction at the University of Karachi, while all standard operating procedures (SOPs) of COVID-19 were strictly followed.

Astronomers suggested that the best way to view Monday’s conjunction was by looking toward the southwest in an open area about an hour after sunset.

“Big telescopes don’t help that much, modest binoculars are perfect, and even the eyeball is okay for seeing that they are right together,” Jonathan McDowell, an astronomer at the Harvard-Smithsonian Center for Astrophysics, wrote in an email to Reuters.

The next Great Conjunction between the two planets — though not nearly as close together — comes in November 2040. A closer alignment similar to Monday’s will be in March 2080, McDowell said, with the following close conjunction 337 years later in August 2417.