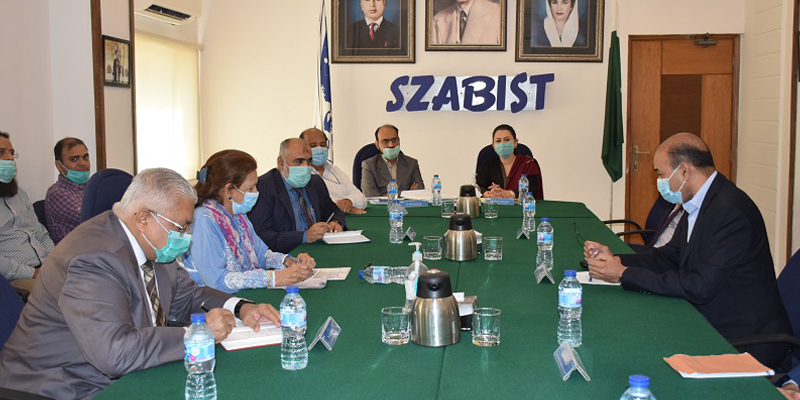 With emergence of cases, varsity opts to suspend hybrid lessons in lieu of online semester until Nov 30

KARACHI: As concerns grow about a second wave of Covid-19 in Pakistan, the Shaheed Zulfiqar Ali Bhutto Institute of Science and Technology (SZABIST) management has decided to shut down its campus in Karachi for another month.

After resuming only a month ago, all physical classes have now been suspended entirely, while the ongoing academic session has been moved online.

Also Read: Prime Minister suggests a book for the youth to read in November.

As per the latest notification issued to students and faculty, the higher education institute is expected to remain closed until November 30.

However, the recommendation to reopen the university on December 1 is still up in the air and will only be finalized upon thorough assessment of the virus situation, closer to the tentative reopening date.

Earlier, when educational institutions across Pakistan, including Sindh, were mulling reopening on September 15 after more than six months of closure, SZABIST too had agreed to open doors to its students. Following strict SOPs, the university had chosen to adopt a hybrid model of learning, where the semester was split between online and on-campus lessons.

According to varsity sources, the brief reopening of campus on the basis of the country’s much-extolled control of infections had resulted in several faculty members testing positive for Covid-19.

“After the first few cases emerged, there was much concern over the decision to keep SZABIST open. But the university chancellor is herself the provincial health minister, and it was her ultimate recommendation to shut down the campus to avoid further transmission,” the source informed.

Expressing her disapproval of the university’s hybrid model of learning, Rida, a social sciences student at SZABIST, said that the semester shifting entirely online is a welcome decision in her opinion.

“The thing is that our classes are quite crammed and stuffy, making it difficult to maintain SOPs on campus. We do sit with a person’s gap in between, but I don’t think that’s enough to keep the virus at bay. Opposed to that, online classes are not only more flexible, but also safer than any time spent on campus,” said Rida.

“I prefer in-person classes over online learning, which is too distracting for students with shorter attention spans, but the lack of social distancing I experienced on campus during the hybrid sessions was very callous,” commented another student, on conditions of anonymity.

It is pertinent to note that SZABIST is so far the only university in Sindh to assume a month-long closure after its earlier reopening.

When virus cases emerged at the Institute of Business Administration (IBA) in September, the campus was immediately shut down for two days. Upon sanitisation and disinfection, it was soon reopened for students, while the hybrid-learning system continues to be in place.

Speaking about the campus closure, SZABIST academics vice president Dr Altaf Mukati confirmed that two faculty members had tested positive for the virus after the university’s reopening. “We did not want further transmissions among our faculty and students, which is why we have moved the term online. We will assess the situation on November 26 and then decide whether we are ready to reopen on December 1,” he told The Express Tribune.