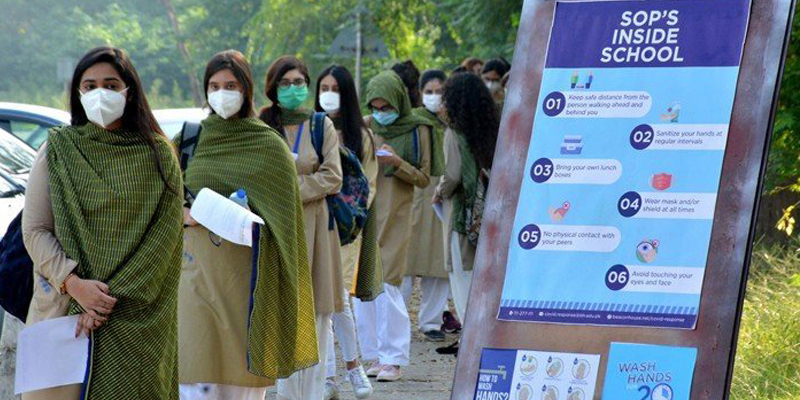 The government on Monday ordered closure of all educational institutions across the country from November 26 till January 10 next year and directed for holding online classes until December 24 to reduce the chances of students being infected during the second wave of the coronavirus, which global as well as local experts fear, worsens during the winter season.

The decision was taken in a meeting of the Inter-Provincial Education Ministers Conference (IPEMC), chaired by Federal Education Minister Shafqat Mahmood. It was decided in the meeting that schools would be closed from Thursday until December 24 but classes would continue online.

The forum, however, allowed schools to call students for one or two days during the week but said the final policy in this regard would be at the discretion of the provincial education departments. It was also announced that the winter vacations would be from December 25 to January 10.

“These institutions will remain closed from November 26 to December 24 while from December 25 to January 10 the winter vacations will be observed. There will be no physical attendance of students in any class,” Mahmood told a news conference after the meeting.

The minister flanked by Special Assistant to Prime Minister on Health Dr Faisal Sultan at the press conference, told reporters that a special meeting would be convened to review the updated situation of the pandemic, prior to formal opening of the educational institutions on January 11.

According to the IPEMC decision, students with online option would continue their studies through this mode of education, while those with no online facility will be facilitated under a special policy, which will be introduced by the respective provincial governments.

The minister also announced the cancellation of the exams, which were scheduled in December, while the exams of assessment and recruitment would continue. “There will be no promotion of students to next class without exams,” he added.

Mahmood directed the Chairman Higher Education Commission (HEC) to arrange online classes on urgent basis for students of higher education. The universities, he said, were allowed to permit PhD students and those from far-flung areas to stay at hostels so that their study might not be affect.

However, the minister stressed that the universities would ensure compliance of strict Covid-19 standard operating procedures (SOPs) for students residing at hostel. He added the decision regarding attendance of teachers in the schools would be taken by the schools management.

Mahmood said exams scheduled for March-April next years, would now be taken in May-June 2021. It was also recommended that the new academic year will commence in August, instead of April, while summer vacations would be curtailed to lessen the eventual loss of students, he added.

Speaking on the occasion, Dr Faisal Sultan described the closure of the educational institutions as a timely decision to contain further spread of the coronavirus. “The prevailing coronavirus situation was kept in view [while taking the decision],” he said.

Dr Sultan added that all the entry tests for the medical field like MDCAT and various levels of senior medical care training would be held as per schedule, while ensuring all the SOPs related to the COVID-19.

Also Read: All Educational Institutes to close from Nov 26 till Jan 11, Shafqat Mahmood

Dr Sultan acknowledged the role of frontline health workers, including doctors and nurses in the fight against Covid-19. He said all possible measures would be adopted to control coronavirus to avoid overloading of the already burdened health system.

Sindh Education and Labour Minister Saeed Ghani opposed the federal government’s decision to close all educational institutions. In an NCOC meeting, Ghani proposed that students should not be promoted to the next grade without examinations this year.

Meanwhile, people belonging to different walks of life in Khyber Pakhtunlhwa appreciated the closure of educational institutions and termed it a wise decision in the wake of recent spike in Covid-19 in the province.

On the other hand, Balochistan Private Schools Association Chairman Bahadur Khan and President Dawood Shah Kakar have denounced the government's decision to close schools from November 26. Kakar said that he also met Education Minister Sardar Yar Mohammad Rind earlier and told him that the smart course for children has been completed but tests have yet to be taken. (WITH INPUT FROM APP)