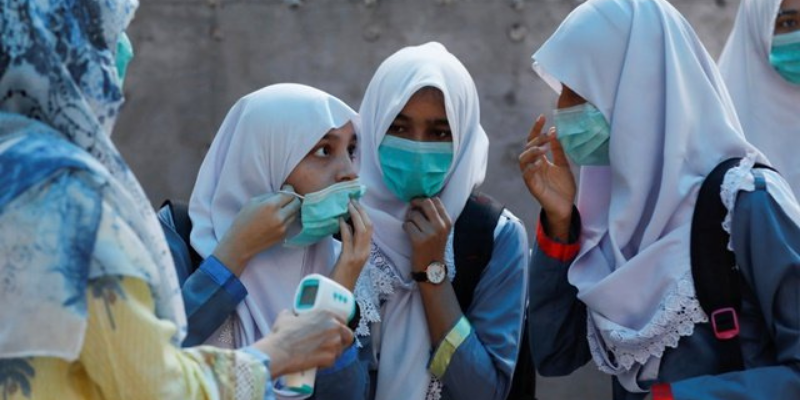 Sindh Education Dept visits 932 schools; finds students without masks in 236 of them

The Sindh school education department issued on Sunday a report pertaining to their inspection of adherence to pandemic-related standard operating procedures (SOPs) in public schools across the province.

The department's directorate general monitoring and evaluation wing visited a total of 932 schools in 29 districts of Sindh in the past week, after schools reopened, and submitted a report to the education secretary. Out of the schools inspected 135 were in Karachi.

The inspection teams assessed schools on the basis of attendance, cleaning and disinfecting arrangement, the use of face masks by staff and students, availability of hand sanitising facilities, as well as efforts made for pandemic awareness. Implementation of SOPs was found satisfying in some schools but lacking at most.

Sindh Education Minister Saeed Ghani had warned earlier that educational institutions may be shut down again if a rise in coronavirus cases or widespread SOP violations are observed. Thus far, the minister has claimed that out of 5,000 tests at educational institutes 91 infections have been detected. The department has reportedly carried out over 14,000 tests so far and the majority of the results are still awaited.

According to the report, on-campus teaching has not yet resumed in 31 of the 932 schools visited. These include five in Karachi - two in Central district and three in Malir district - six out of 56 schools inspected in Mirpurkhas and two out of 34 in Badin.

Moreover, at 64 schools, it was noted that students were not attending on-campus classes after schools reopened.

According to the report, in 604 schools, all the teaching and non-teaching staff wore face masks but only half of the faculty and staff wore masks in 200 schools, while in 110 schools, the entirety of the staff was without face masks.

In Karachi, students in 93 schools were with face masks but in 23, students were without. Teaching and non-teaching staff followed this SOP at 107 schools, but faculty and staff at 35 of schools in the metropolis disregarded it.

Meanwhile, at four out of 13 schools in Khairpur, students were found without face masks and the same was noticed at 16 schools in Badin.

The inspection teams found social distancing in place at 723 schools but absent from 191 schools.

The report termed cleaning and disinfecting arrangements satisfactory at 595 schools but at 319 schools, the arrangements were declared poor.

Besides, hand sanitisers were noted to be adequately available at 516 schools but absent at 398.

Only 35 schools in Karachi were found with satisfactory hand sanitising facilities while in Larkana, the number of such schools was 26, in Hyderabad and Khairpur it was 12 each, and in Badin, it was 21.

With regards to awareness, the report stated that 285 schools had put up posters for coronavirus awareness but no such arrangements could be seen at 692 schools.

Educational institutes were permitted to reopen nationwide in phases, beginning from September 15, after a six-month long closure enforced in light of the pandemic. Since then, some schools across the country have been sealed for either violating SOPs or after coronavirus cases were detected while some varsities have reverted back to online classes or switched to hybrid models of teaching. The phased schedule announced earlier by the federal and provincial ministries remains in place in other provinces.

The number of Covid-19 cases in Pakistan reportedly appears to be on the rise again after decreasing numbers were witnessed in August.