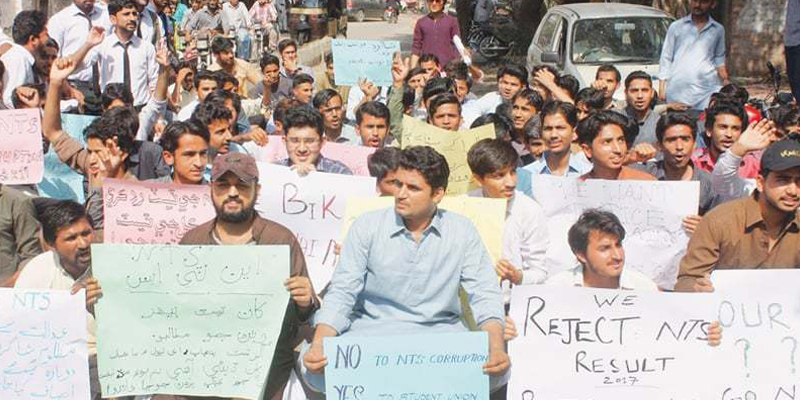 Students are holding protests against the suspected leak on social media of a National Testing Service (NTS) paper in Dir, Battagram, and Bannu.

The protesting students said the question paper for recruiting primary school teachers (PSTs) in Battagram was circulated several hours before the scheduled exam on WhatsApp.

"We saw the pictures of the entire exam papers on Facebook and Whatsapp," a student in Dir stated.

A candidate pointed out that such leaks are a routine in every NTS exam now.

"In recent months, paper leaks have been reported many times ahead of any NTS examination," a protester said, adding that the government has not removed incompetence and mismanagement in the National Testing Service.

Another candidate disclosed that papers were leaked on WhatsApp for all subjects, including Maths, English, Current Affairs, Islamiyat, and General Science, adding that students were also permitted to bring their cell phones within the examination halls they were also assisted by the vigilantes at the middle.

Another student said that with the NTS, only 25 percent of the candidates get jobs on merit while the remaining seats are sold or corrupted.

Meanwhile, the Chief Minister of Khyber Pakhtunkhwa, Mahmood Khan, has noticed and directed the investigation into this matter. Mahmood said a 'zero tolerance' guideline against corruption and ordered the management to pick the government officers on merit.