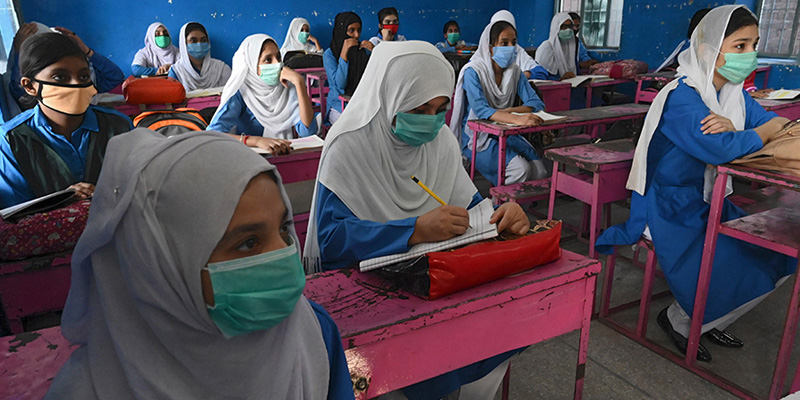 Ghani asserted this while visiting different schools to review the arrangements for implementing the SOPs and later in a video statement.

During the visits, he instructed all educational institutes on Thursday to complete the implementation of pandemic-related standard operating procedures by then.

The education minister also issued notices to two officials of the education department in East and Central district, seeking explanation over failure to fulfill their responsibilities.

Later, Ghani said while talking to media persons that coronavirus cases in the province had declined and the situation had improved.

When asked why more numbers of cases were now being reported, he said it was because more people were getting tested.

Meanwhile, Pechuho warned against not further deferring the reopening of schools.

She said this during a programme at a private television channel.

Advising that schools should be kept closed for at least another month and a half, she observed that coronavirus cases were on the rise again and resuming on-campus classes in such a situation would not be wise.

It will particularly be dangerous for children, she expressed concern.

Confirming this, her spokesperson said a rise of 1.3 per cent to three per cent had been observed in the incidence of the coronavirus and reopening schools at the stage would be akin to inviting a second wave of the pandemic.

Better but not well

Separately, while Sindh Chief Minister maintained that cases had declined in the province, he also raised alarm over 185 persons testing positive for the coronavirus, against 39,765 tests conducted at educational institutes. Sharing this information with media persons during a press conference on Thursday, he said, "This is serious and we all have to be careful about children.

Besides, the CM slammed the Centre for its "lukewarm response" to rain devastation in Sindh.

"None of the federal ministers has bothered to visit rain-affected people in Sindh, while citizens suffer in pain and agony," the CM remarked.

Speaking of widespread devastation caused by heavy downpours in August, the CM blamed the disasters partly on encroachments.

"I have personally witnessed buildings being constructed along stormwater drains," he said, adding that various builders had been issued leases for these illegal constructions and now, "they are acting as if they own the city."

He further stated that Karachi's sewerage system was 50 years old and in a decrepit condition, unable to sustain through heavy downpours.

Saying so, he stressed the need to restore the city's natural waterways, remove encroachments alongside nullahs and improve the existing sewerage system.

"We are planning new sewerage systems in Kharadar, near KDA Chowrangi, Surjani Town and in some areas of Malir," he added.

Referring to rain devastation in rural areas, the CM said the province's 20 districts had been declared calamity-hit, where 136 people had died due to downpours, 86 injured and 15,233 villages had been inundated.

He then reiterated his criticism of the federal government, saying that it had just paid lip services and provided no actual help.

Urging the media to show the plight of the people in rural areas so as to gain donor agencies' attention, he stated that the government needed Rs67 billion for rain rehabilitation but the provincial government had limited resources.

He went on to say that the federal government was supposed to transfer Rs126 billion to Sindh, but had given just Rs70 billion hitherto.

"This further limits our capacity to carry out rain relief activities," he complained.