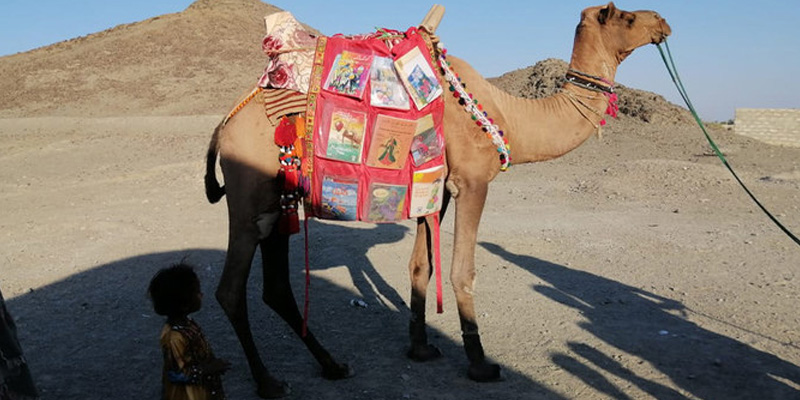 QUETTA: Two women and the two charity organizations in Baluchistan have started a unique venture of "mobile camel library" in which the camel carries books to children who want to learn and read.

More than 50 million students were sent home in March as the country closed its educational institutions amid Covid-19 spread. The school closure had significantly affected the children living in Baluchistan's remote areas where online education or online classes' possibility is nil. The province already has the lowest literacy rate as compared to other regions of Pakistan.

As per the Pakistan Bureau of Statistics, approximately 62 percent children between the ages of 5 and 16 are out of school in Baluchistan rural areas. The two sisters from Baluchistan, Raheema Jalal, the principal of the Zubaida Jalal Girls High School, and Zubaida Jalal, the Pakistani minister for defense production, came up with the novel idea during the coronavirus pandemic that: if children couldn't go to school, why not take the books to them?

"We have named the camel Roshan [bright light] because he has been lighting [the path of] education for the deprived children of Balochistan," Raheema told Arab News.

With the help of the non-profit Alif Laila Book Bus Society, which has established more than 7,000 mobile libraries across Pakistan, with over 1.5 million books donated in the past four decades, Muhammad, 45, and Roshan have taken their library of fifty books to six villages of Mand since October 2. Over 150 children have borrowed books from the program in the past six weeks, Raheema said.