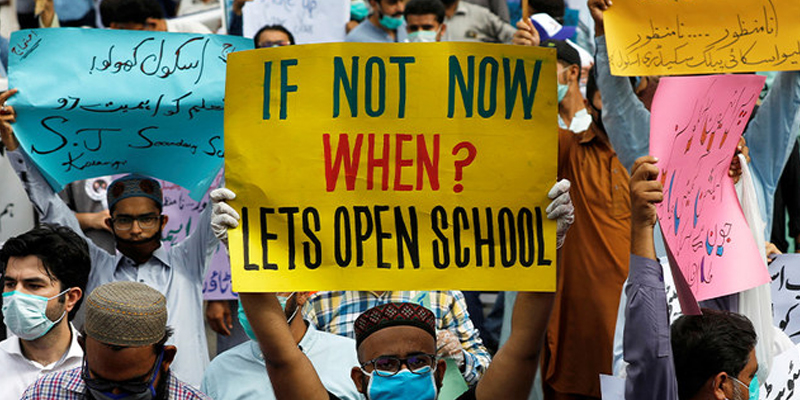 The Government Secondary Teachers Association (GSTA) declared a hunger strike at the Karachi Press Club on 30 December to call for the reopening of schools and the issuance of wages to teachers employed in 2012 by the Department of School Education and Literacy.

Under the excuse of COVID-19, the GSTA has also criticized the provincial government for purposely disrupting the education system in government schools.

The GSTA Central President, Maqsood Mehmood Mahesar, said, "The PPP government has kept Sindh's children away from schools under the pretext of COVID-19 to cover up its failure while holding political meetings itself".

He added that the authorities rejected the seven-point document of priorities of the GSTA that detailed the teachers' concerns.

The priorities include the effective reopening of schools, the issuance of the salaries of other system teachers hired in Sindh in 2012, the permanent promotions of teachers who completed the NTS, standard pay scale 17 for all junior school teachers, and community insurance for all retirement staff.

Also Read: A meeting to be held on the situation of educational institutes

Mahesar also pointed out that the lack of teachers in the province requires at least 40,000 teachers to be hired and said that only teachers could be selected and promoted to administrative positions.

The president further noted that the GSTA has agreed to make 2021 a regular academic year. A community-level program would begin and proposed that teachers could go on a long march starting in the last week of January 2021 in Kashmore.