Exams to be held from third week of May: Shafqat Mahmood 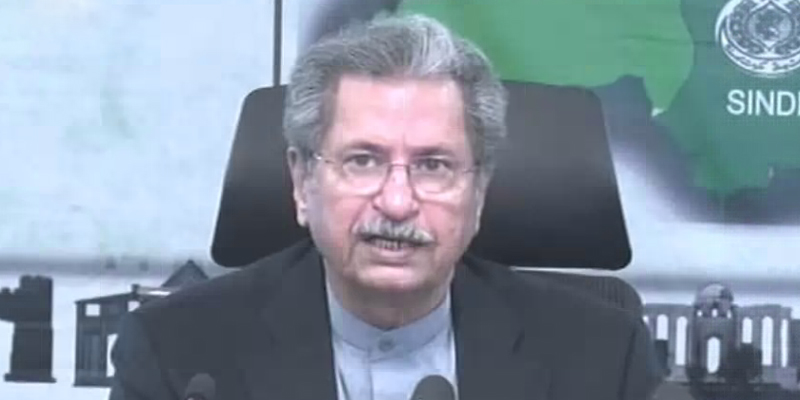 Exams to be held from third week of May: Shafqat Mahmood

Federal Education Minister Shafqat Mahmood announced on Tuesday that classes 1 to 8 will remain closed in the districts affected by Covid-19 until April 28.

“These classes can take place online but there will be no physical presence during the sessions,” he explained after a meeting at the National Command and Operation Centre (NCOC) to review the situation.

The minister further said that board exams for classes 9, 10 and 11 will be held from the third week of May. Meanwhile, Cambridge exams will be held as per scheduled.

He further said that classes from 9 to 12 will continue to take place as usual, with strict adherence to the precautionary SOPs.

"It is the prerogative of the provinces to decide as to which of their districts are the most affected and require strict measures."

Sindh, the minister added, has already announced the closure of the classes in view of the situation.

“The NCOC will once again review the situation on April 28 and make further decisions,” he maintained.

He added that the meeting deliberated mainly on whether to open the educational institutions that are closed until April 11 and the schedule of the exams.

Shafqat also informed that the universities will be requested to postpone the admissions.

The meeting was attended by education and health ministers to deliberate about the reopening of the educational institutions.

In view of the third wave of coronavirus in Pakistan, on March 10, the government ordered closure of all schools in Covid-19 hotspots for two weeks from March 15.