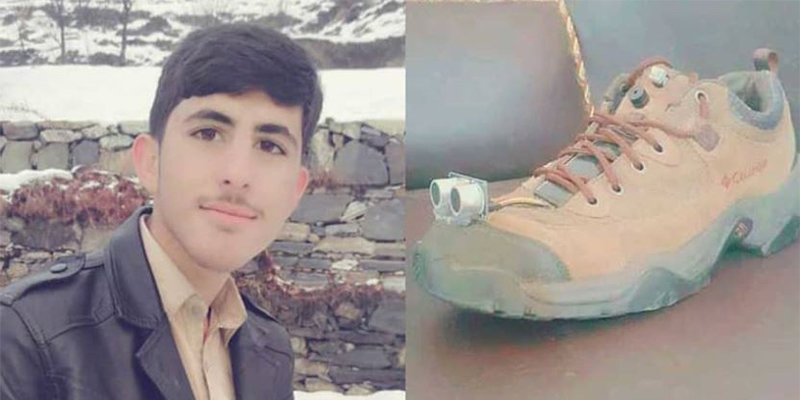 A teen from Khyber Pakhtunkhwa created "smart shoes" that utilise vibration and sound to warn visually impaired individuals of obstacles within a 1.2-meter radius.

Wasiullah, a 17-year-old Swat native, has created "smart shoes," which, if sold on a national scale, might have a significant impact on the lives of visually impaired individuals.

In this regard, he stated that his interest in innovation began when he was a child, when he used to repair and restore broken battery-operated toys.

The ultrasonic sensor and Arduino microcontroller are included in the shoes, according to the youngster. The shoes are programmed to send sound and vibration alerts to the wearer when they come across an obstacle.

A pair of "smart shoes" costs around Rs. 4,500, according to Wasiullah. He would not be able to fund their mass production, since he is also responsible for his own tuition expenses.

Wasiullah is the most talented student in the college, according to his physics teacher, Mohammad Farooq. He went on to say that he wanted to create a wheelchair that would help visually impaired individuals navigate their surroundings more easily. Wasiullah, on the other hand, was unable to do so due to financial constraints.

Similar shoes are available in a number of nations, but their prices are out of reach for many visually impaired Pakistanis. He urged the government to endorse Wasiullah's smart shoes because they are more inexpensive.

Farooq claimed that the teenager has everything it takes to be a top scientist. All he needs now is good supervision, coaching, and the chance to represent his country proud on the international stage.

Meanwhile, Sajid Shah, Director General (DG) of the Directorate General of Science and Technology (DGST) KP, has indicated that he will provide Wasiullah with the support he needs to pursue higher education and begin mass production of "smart shoes."

Wasiullah has also been invited to the DGST headquarters in Peshawar, where the shoes would be examined by DGST experts before being promoted for commercial purposes.