New York University Graduate School of Arts and Sciences offers the Falak Sufi Scholarship for Pakistani Students. The Falak Sufi Scholarship is to support students from countries with a  majority Islamic population in Soth Asia who might not otherwise be able to obtain a graduate education. Selected students, preferably female, will be enrolled in the two-year master's program in Near Eastern Studies.

Falak Sufi Introduction: Falak Sufi was born in Pakistan in 1983. She possessed a generous heart, the urge to engage with and change the world, and a brilliantly original, vivacious mind. She graduated from the National University of Singapore with first-class honors in Political Science. While young, she began to publish the work that showed her great gifts and talent. Among her interests were women and gender in South Asia, the historiography of this region, and the strength of the humanities. However, no list can capture the range of subjects about which she thought, spoke, and wrote. She was a much beloved, deeply admired graduate student in Near Eastern Studies at the Kevorkian Center of New York University when she died tragically in New York in 2008.

How to apply for New York University Falak Sufi Scholarship

Application information for all potential students to the master’s program in Near Eastern Studies can be found online in the GSAS Application Resource Center. The online application for admission is also the application for all Graduate School financial aid. No additional forms are required. If an applicant explicitly wishes to be considered for a Falak Sufi Scholarship, that person should add one paragraph to the application’s “Statement of Purpose” explaining how the candidate meets the criteria for the scholarship and how the award will enable the candidate to pursue graduate education. 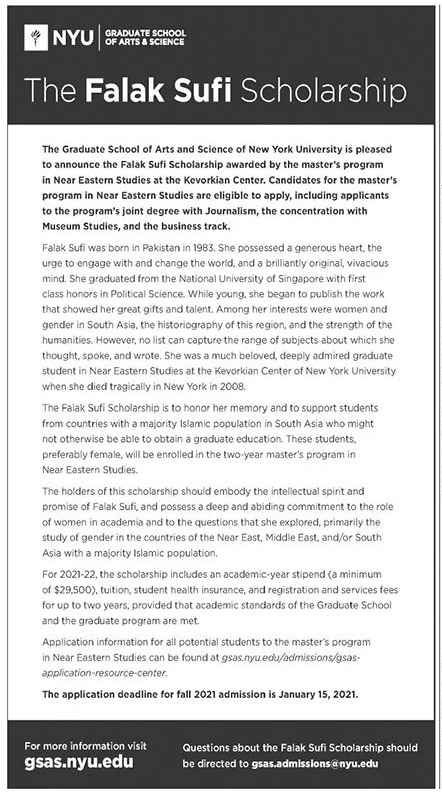