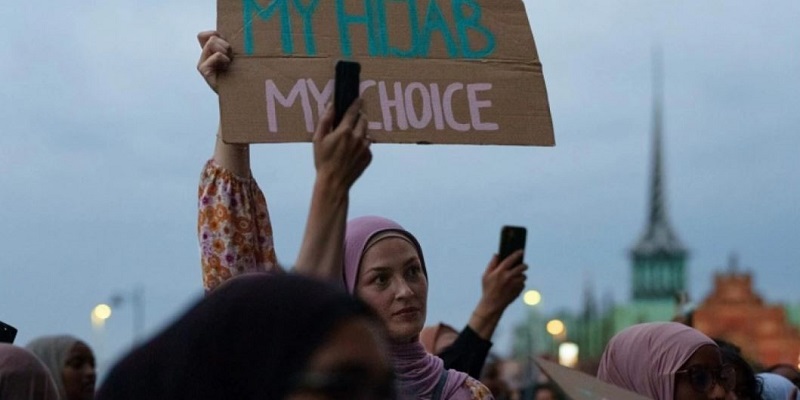 In various cities, protests have erupted over the proposal by Denmark's ruling Social Democratic Party to ban the hijab in elementary schools.

According to reports by Al Jazeera the proposal, made last month, is one of nine recommendations aimed at curbing "social control over the dignity" of girls from minority backgrounds.

Iram Khawaja, an associate professor at Aarhus University who conducts research on how children from religious and ethnic minorities navigate Danish society, opposed the proposal.

In Khawaja's opinion, banning the Hijab will not solve the problems girls who are subjected to social control face.

This ban, however, will cause major problems for girls who already suffer negative social control, he said.

Headscarves or Hijabs used in elementary schools can divide children into 'us' and 'them' groups, according to the commission's report.

According to the study, conducted by research companies on behalf of the Danish Ministry of Education, 1,441 sixth through eighth grade students from 19 elementary schools, 8 independent and private schools, as well as 22 student interviews and 17 interviews with teachers took part in the study.

The principal of Tilst School in Jutland, which has about 700 students, also opposed the ban.

According to the principal, such a ban would create a law between children and their parents and children would be caught in the middle.

He discussed how he was responsible for running a school where everyone is valued and has a place.

Meanwhile, public demonstrations are calling for the hijab ban to be removed. In Copenhagen, thousands of people, mostly women, demonstrated against the proposal and demanded that the ban be lifted immediately.

Danish society is full of hijab-wearing Muslim women, who are doctors, psychologists, bus drivers, and artists.

Moreover, protestors said that they are wearing hijab with pleasure and consent, hijab is a matter of heart that shouldn't be politicized and this ban violates the fundamental rights of girls.

If the proposal is implemented, schoolgirls will be compelled to remove their hijabs.