Muneeza Hashmi’s Book ‘Conversations with my Father’ Releases in Brussels 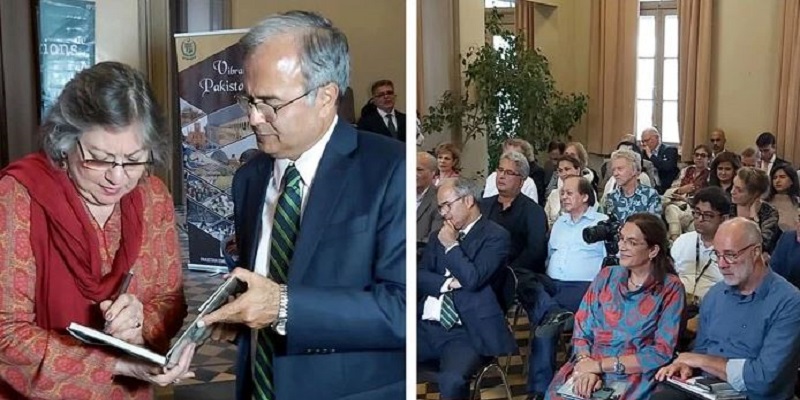 Muneeza Hashmi’s Book ‘Conversations with my Father’ Releases in Brussels

Muneeza Hashmi under the auspices of the Pakistani Embassy in Brussels and the European Literary Circle, released her book, a letter she wrote back to her father, progressive poet Faiza Ahmed Faiz.

An opening ceremony was held for the book, ‘Conversations with my Father’.

When the poet resisted himself in the dark moments of history and incited others to resist through his poetry, G. Goris said he was protecting future generations' conscious, political, and social rights. In this sense, Faiz Ahmed Faiz was not only Muneeza Hashmi's father, but he was also a father like figure to the nation. His poetry is and always will be a living art form.

Shiraz Raj hosted a question and answer session with Muneeza Hashmi during the event. According to the author, while much has been written about Faiz Ahmad Faiz in Pakistan as a poet, a human rights activist, and an individual seeking to find a balance between human rights, not much has been written about him as a father and someone who resists authority. She said that she has tried to highlight the role of Faiz Ahmed Faiz as a father in this book.

Despite the fact that Muneeza Hashmi’s mother Alys Faiz was British; her father always insisted that learning Urdu was extremely important. It is for this reason that all the letters written by Faiz Ahmad Faiz to the author are in Urdu. On this occasion, she paid a wonderful tribute to her mother. In spite of her father's absence, Alys stood by him like a rock and cared for the family.

According to her, his poetry has both simplicity and literature, since it was written for the common man.

Furthermore, she discussed Faiz's religious thoughts and ideas, pointing out that he used to say that his religion was the religion of Rumi, while the renowned intellectual Ashfaq Ahmed Sahib called him a reprehensible Sufi.

As a result of Faiz Sahib's efforts, cultural institutions like the Pakistan National Council of Arts and Folk Heritage came to the forefront. In spite of their differences, they created a sense of unity through Pakistani culture.

In reference to various incidents that happened with her, Muneeza Hashmi expressed her satisfaction that Faiz Sahib has become the identity of Pakistan due to his literary role in other countries.